Here, we address the problem of Bayesian model selection (BMS) at the group level. First of all, note that one could perform such analysis under two qualitatively distinct assumptions:

Note: In classical statistics, random effects models refer to situations in which data have two sources of variability: within-subject variance and between-subject variance, respectively. The latter is typically captured in terms of the spread (over subjects) of within-subject parameter estimates. This is not equivalent to RFX-BMS, where one assumes that the model that best describes a given subject may depend upon the subject.

We first recall how to perform an FFX analysis. We then expose how to perform a RFX analysis. Finally, we address the problem of between-groups and between-conditions model comparisons. The key idea here is to quantify the evidence for a difference in model labels or frequencies across groups or conditions.

In brief, FFX-BMS assumes that the same model generated the data of all subjects. NB: Subjects might still differ with each other through different model parameters. The corresponding FFX generative model is depicted in the following graph: 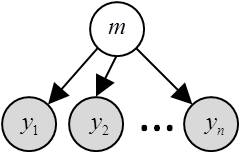 where \(m\) is the group’s label (it assigns the group to a given model) and \(y\) are (within-subject) experimentally measured datasets.

Under FFX assumptions, the posterior probability of a given model is expressed as:

FFX-BMS is valid whenever one may safely assume that the group of subjects is homogeneous (i.e., subjects are best described by the same model \(m\)).

In RFX-BMS, models are treated as random effects that could differ between subjects and have a fixed (unknown) distribution in the population. Critically, the relevant statistical quantity is the frequency with which any model prevails in the population. The corresponding RFX generative model is depicted in the following graph: 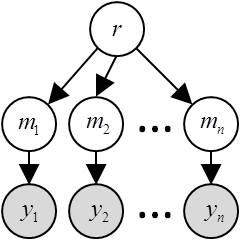 where \(r\) is the population frequency profile, \(m\) is the subject-specific model label (it assigns each subject to a given model) and \(y\) are (within-subject) experimentally measured datasets.

in VBA, the above RFX generative model can be inverted as follows:

where the I/O arguments of VBA_groupBMC are summarized as follows:

In Stephan et al. (2009), we introduced the notion of exceedance probability (EP), which measures how likely it is that any given model is more frequent than all other models in the comparison set:

Estimated model frequencies and EPs are the two summary statistics that typically constitute the results of RFX-BMS. They can be retrieved as follows:

Protected exceedance probabilities (PEPs) are an extention of this notion. They correct EPs for the possiblity that observed differences in model evidences (over subjects) are due to chance (Rigoux et al., 2014). They can be retieved as follows: PEP = (1-out.bor)*out.ep + out.bor/length(out.ep), where out.bor is the Bayesian Omnibus Risk (BOR), i.e. the posterior probability that model frequencies are all equal.

The graphical output of VBA_groupBMC.m is appended below (with random log-evidences, with K=4 and n=16): 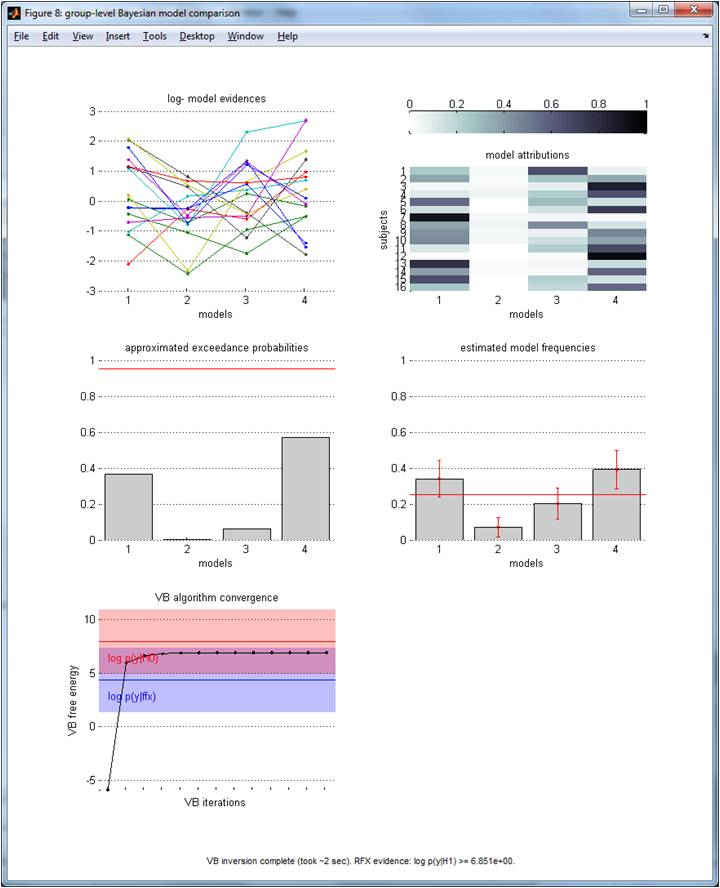 Optional arguments can be passed to the function, which can be used to control the convergence of the VB scheme.

Importantly, one may want to partition the model space into distinct subsets (i.e. model families). For example, a given family of models would contain all models that share a common feature (e.g., some non-zero parameter). Information Re: model families are passed through the options variable (see header of VBA_groupBMC.m):

The above script effectively forces RFX-BMS to perform family inference at the group-level, where the first (resp. second) family contains the first and second (resp., third and fourth) model. Querying the family frequencies and EPs can be done as follows: 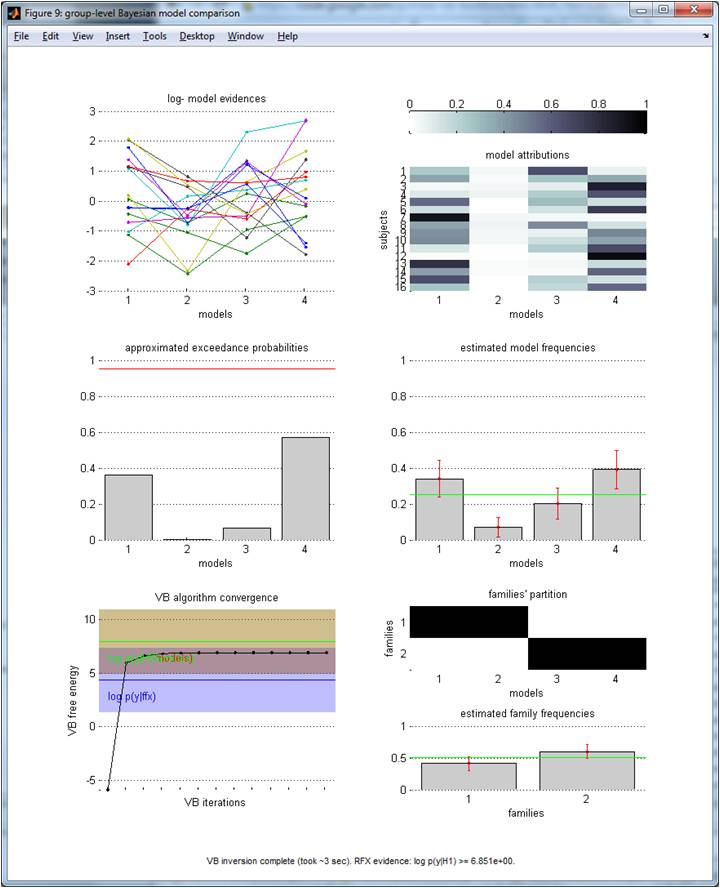 (Same format as before). NB: in the lower-left panel, one can also eyeball the “family null” log-evidence (here, it is confounded with the above “model null”). Lower-right panel: model space partition and estimated frequencies (y-axis) over families (x-axis).

Now what if we are interested in the difference between treatment conditions; for example, when dealing with one group of subjects measured under two conditions? One could think that it would suffice to perform RFX-BMS independently for the different conditions, and then check to see whether the results of RFX-BMS were consistent. However, this approach is limited, because it does not test the hypothesis that the same model describes the two conditions. In this section, we address the issue of evaluating the evidence for a difference - in terms of models - between conditions.

Let us assume that the experimental design includes p conditions, to which a group of n subjects were exposed. Subject-level model inversions were performed prior to the group-level analysis, yielding the log-evidence of each model, for each subject under each condition. One can think of the conditions as inducing an augmented model space composed of model “tuples” that encode all combinations of candidate models and conditions. Here, each tuple identifies which model underlies each condition (e.g., tuple 1: model 1 in both conditions 1 and 2, tuple 2: model 1 in condition 1 and model 2 in condition 2, etc…). The log-evidence of each tuple (for each subject) can be derived by appropriately summing up the log evidences over conditions.

Note that the set of induced tuples can be partitioned into a first subset, in which the same model underlies all conditions, and a second subset containing the remaining tuples (with distinct condition-specific models). One can the use family RFX-BMS to ask whether the same model underlies all conditions. This is the essence of between-condition RFX-BMS, which is performed automatically as follows:

where the I/O arguments of VBA_groupBMC_btwConds are summarized as follows:

Now, one may be willing to ask whether the same model family underlies all conditions. For example, one may not be interested in knowing that different conditions may induce some variability in models that do not cross the borders of some relevant model space partition. This can be done as follows:

Here, the EP will be high if, for most subjects, either family 1 (models 1 and 2) or family 2 (models 3 and 4) are most likely, irrespective of conditions.

If the design is factorial (e.g., conditions vary along two distinct dimensions), one may be willing to ask whether there is a difference in models along each dimension of the factorial design. For example, let us consider a 2x2 factorial design:

Here, the input argument factors is the (2x2) factorial condition attribution matrix, whose entries contain the index of the corresponding condition (p=4). The output argument ep is a 2x1 vector, quantifying the EP that models are identical along each dimension of the factorial design.

Of course, one may want to combine family inference with factorial designs, as follows:

Note that the ensuing computational cost scales linearly with the number of dimensions in the factorial design, but is an exponential function of the number of conditions (there are K^p tuples).

Assessing between-group model comparison in terms of random effects amounts to asking whether model frequencies are the same or different between groups. In other words, one wants to compare the two following hypotheses (at the group level): 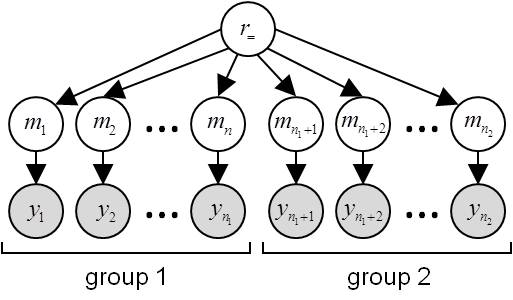 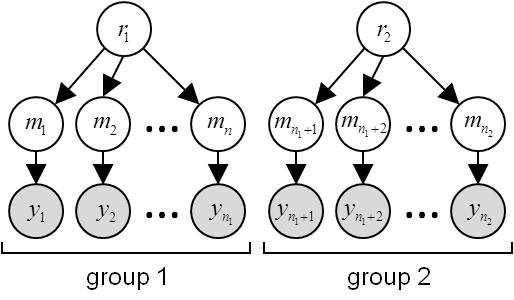 where L1 (resp. L2) is the subject-level log-evidence matrix of the first -resp. second) group of subjects, and Fe is the log-evidence of the group-hypothesis \(H_=\).

Under \(H_{\neq}\), datasets are marginally independent. In this case, the evidence \(p(y\mid H_{\neq})\) is the product of group-specific evidences:

The posterior probability \(P\left(H_= \mid y \right)\) that the two groups have the same model frequencies is thus simply given by:

Note that one can directly test for a group difference with the function VBA_groupBMC_btwGroups which directly performs the above analysis: